About the author: Sales Head at SORIL Infra Resources Ltd. (An initiative of Indiabulls Group) 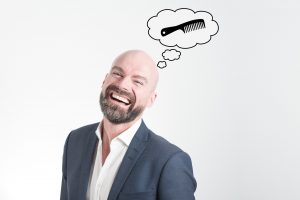 In the last decade of the 20th Century, When I was in college and contemplating my future career prospects, I wanted to explore a lot of new avenues, Apart from secured government jobs, MNC’s were the new entrants who were offering fat salaries and exciting job opportunities.

Sales was a field which was very attractive for the youngsters like me, who used to like travel, explore new territories, wanted to try different foods , meet new people and at the end of the day generate sales for the continuity of this pleasure.

When I was trying to understand the sales job, I was told by my predecessors that Sales is nothing but selling a comb to a bald person.

I was very curious to know why a bald person would buy a comb. I could not find any logical reason, so I concluded that he will buy a comb for his family and friends for gifting purpose.

When I came to the sales job I realized that yes it is true that most of the salesmen were selling combs to the bald people and everyday they have to find new customers for their product.

The salesman as a fraternity was the most untrustworthy group of the people.

Why are 70% of people not able to grow? 20% change their lines and only 10% are able to progress in their career.

We can say that Manager positions are less, Competition is tough, In the second half of the career, energy is less.  Opportunities are shrunken and capabilities are not developed in the last 10-15 years.

But the most important is that salesmen were tired of finding a new bald person every day.

Finding a single customer is very difficult. But they found many new customers for the years, yet they still could not grow.

They were probably always looking to sell the comb but not hair therapy.

The day the Salesperson starts selling hair therapy to the bald person his combs will get sold automatically. The process will reverse and customers may start coming to his doorstep.

To sell Hair therapy,  these are the most important ingredients which a salesperson should possess:

Friends, Trust me, the day a salesperson becomes authentic, not only his perception among the customer change but it will be a forward step towards changing the perception of the entire sales fraternity.

People who grew in the career already had these above-mentioned qualities in their persona and that is why they could lead and motivate a team.

In conclusion, Before becoming a good salesperson if we become a good human being, Then success will be at our doorstep.

2 thoughts on “How to Sell Comb to a Bald Person”